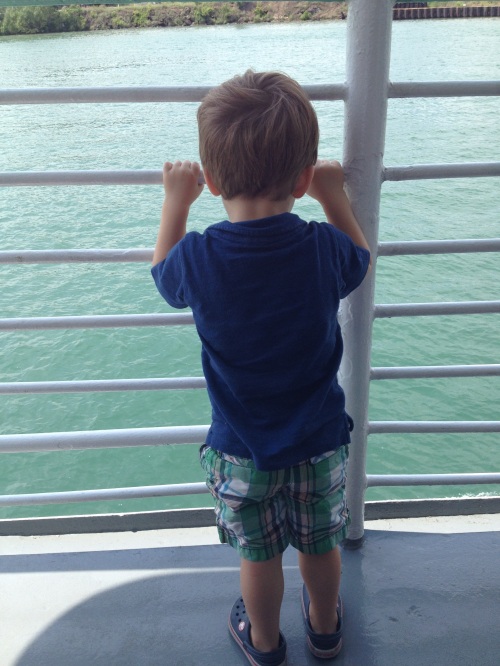 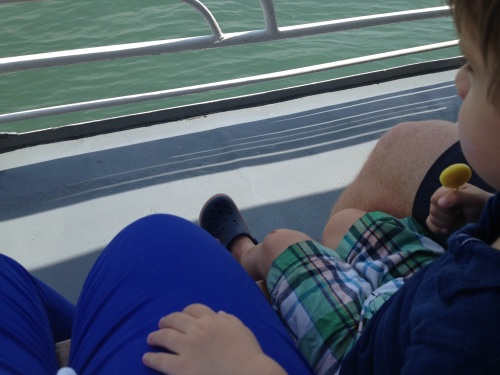 A beautiful day for a boat ride! The hum of the engine acts as a lullaby while the summer breeze tickles the toes through flip-flops (or flippers, as B calls them). The gentle touch of a toddlers hand is the icing on the cake. Although other “rulers” may be official in the two countries we are balancing between, B is truly a prince today.

As we slide through ancient glacial pathways that now separate two countries, one is tempted to think of those who swam, paddled and sunk in these depths. I am reminded of the constant battle between man and nature as a huge plume of steam rises from a smokestack along the rivers edge.

The Detroit Princess Cruise line is NOT a sponsor nor did they compensate me in any way to take their cruise. I purchased a Groupon and took the chance on a sunny July day that my two year old could miss his nap and still enjoy the river.

Facts:
Daily outings at 1:00 and 3:30PM at Bishop Park in Wyandotte (behind the Henry Ford Hospital and Bacon Memorial Library) and a separate boat has the same schedule at Hart Plaza/ RiverWalk. All passengers are taken on a first come first served basis do try to arrive thirty minutes before boarding and be prepared to stand in line, even if you’ve purchased your tickets in advance.

Good to know:
The ramp (the gang plank?!) was too skinny to fit the stroller through so we had to “unload it”, fold it and carry kiddo and everything else on board. Once on board we could’ve stayed in the dining area but attempted going up on the covered deck. Found a nice shady wooden bench (relief) after braving metal stairs that were more like a ladder (yikes). The bathroom was much like you would find on an airplane, so diaper changes would need to be done ” al fresco”. You can bring drinks and snacks on board for the 0-5 year olds but anyone 6+ better have cash on hand for anything else available at the bar.

At $17 per person 6+ years old for a two hour cruise it’s a fine family value, though I’m glad I had a half off deal.

Does your toddler love the water? If so, what water fun have you had this summer?

Posted in To do in Metro Detroit